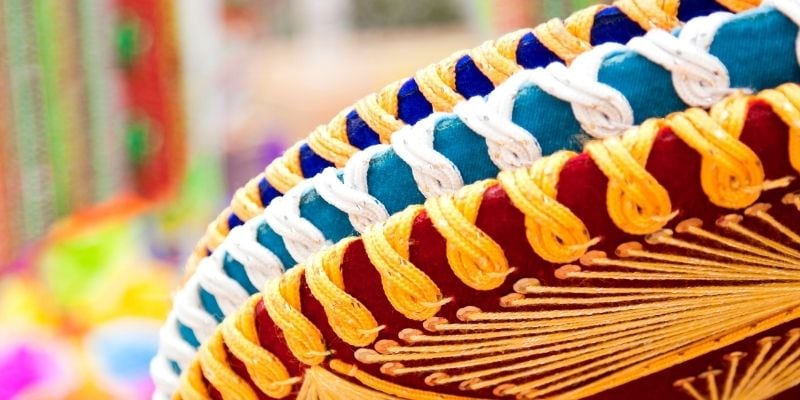 I have a certain photo deep in my social media archives. Me, in a sombrero.

Am I getting reactions yet? Horror?

Whatever the title made you feel, I invite you to grab a cup of something and settle in– this is a long one. I think we are capable of thinking through complex cultural issues and it’s absolutely worth it when we have influence on students and communities.

Why Are Sombreros Loaded Symbols?

Years ago I was talking with my Mexican friend E* about this. She loves to see pictures of her friends proudly wearing something from her culture and the image of a sombrero feels beautiful.

She and her family have felt the marginalization of being minorities in the U.S.– sharply, at times– and the opportunity to share her food, music, and cultural symbols makes her feel proud.

So why would I feel nervous about that picture of me?

Here’s the context: I was at our favorite Mexican restaurant, with our best Mexican friends, and we were celebrating my friend’s birthday and mine. We each donned a beautiful big sombrero, got serenaded, and snapped a happy picture together.

It was a lovely moment. And still, I’m not interested it putting up that image on my site or social media.

Why? Because I live in a world that’s bigger than me.

Sombreros are a decor staple in many Spanish classrooms. They’re donned in Mexican restaurants for the birthday serenade. Look up Mexican decor? The ubiquitous sombrero will be there, along with hot peppers, cacti, and mustaches.

We know the conversation around cultural appropriation is controversial. Every year, this debate comes up in Spanish teacher groups.

One group usually argues that sombreros are a harmful stereotype that causes further harm to a historically marginalized community.

The other side laments that “everything is under fire and everyone is just so sensitive.”

I also find that a few Latinx educators offer another perspective: they love seeing beautiful sombreros being celebrated and don’t agree that a using piece of culture equals disrespect.

How is a thoughtful teacher to respond– especially a non-Latinx teacher?

I’d like to propose that we consider the most nuanced approach possible.

If you already convinced that woke-ism is ruining America or that anyone who dons a sombrero is heartless and ignorant, I doubt my words here will help much. Here’s what I actually think about sombreros:

Sombreros Are a CoNcrete, Common Symbal.

Here are the questions I want to consider:

Historically, old cartoons and media images often included a sombrero on a Mexican person, with an intended negative portrayal.

Aside from those clearly offensive associations, the sombrero is now a reduction of culture. The gist is this: sombreros very specifically represent an ethnic stereotype.

Is that bad? Here’s the thing:

Stereotypes cause us to take one aspect of culture and think it’s larger than it is. (This specific item represents all Mexicans.)

Stereotypes also compress a complex, diverse, and rich culture into one image. (All Mexicans look/live like this.)

And what’s the danger, here in the United States? The worst risk is dehumanization of people groups and students who lack critical thinking when it comes to other cultures.

Our students see a sombrero and think of Mexico. We don’t have to teach that.

When a group of tequila-shooting friends takes a sombrero selfie on Cinco de Mayo, it’s a way to superficially “celebrate” a caricature of culture, devoid of any serious engagement. I’d wager most of them don’t even know what Cinco de Mayo celebrates, anyway.

It also matters deeply that we shared a complicated past with the people of Mexico.

We can get into cultural appropriation below, but first let’s do a review of that complicated past.

DO History and COntext Matter?

To me, this is the most glaring omission in conversations about sombrero-wearing.

Here’s the thing: we cannot divorce the question of sombreros from Mexico-U.S. history, and the discrimination the Latino community has faced.

There are many more examples, but consider these events after the Mexican-American War. (This was when Mexico was forced to grant 55% of its territory to the U.S., which included a huge swatch of Mexicans that were suddenly living in U.S. territory.)

And these examples do not include more current events, or our history of U.S. businesses that have been more than happy to accept (and exploit) Mexican workers. (Still not convinced? Read this detailed collection of quotes from U.S. presidents throughout our history, from the Washington Post.)

Now, does this history in and of itself answer the sombrero question? Is anyone who grabs a sombrero selfie actively, knowingly, trying to make light of discrimination?

I don’t think so.

However, we need this context in mind if we’re seriously seeking a nuanced opinion.

Our starting point has to be: what best honors Mexican culture?

How can we use cultural artifacts to support Cultural literacy and empathy?

In some cases, a sombrero can be used to honor Mexican culture.

In many others, it inculcates a flippancy and disregard for very real marginalization our culture has perpetuated.

We teach in the real world, not in a bubble. There is a power difference between the United States and Mexico.

So, let’s take a look next into examples of usage.

Teachers are already beleaguered and under attack. We know the vast majority of teachers have the best of intentions.

Is it worth it to argue over something like a hat?

In recent years, photos like the one below have blown up in the news, and rightfully so. Even as the images below make me mad, I wince for these teachers who now have this image everywhere. We learn, we grow– and yet these images stick.

In a fraught time of immigration, separated families, and discrimination, these images stick to the psyches of our students too.

The real sadness I feel is for the harm these pictures cause to marginalized students and families.

The L.A. Times reported the principal at San Pascual high school as saying,

“Cultural appropriation is offensive, whether it was intentional or not,” Principal Martin Casas wrote in a statement. “We owe an apology to our Latinx and Chicano community, a community that I am part of. It is unacceptable and has no place in our school. I am saddened and disappointed that this happened, but we will use it as opportunity to learn and grow together.”

I’m glad for this response and I do think it’s the general trajectory of our educational system.

The History of the Sombrero

Let’s say you are decorating your Spanish classroom to surround your students with a rich feeling of culture.

If you have an authentic sombrero brought back from your family rancho, or carefully bought from a local artisan seller, that might make the difference.

I do think that’s different from the very-not-locally-made imitation sombrero I’m sorry to say I once had hanging around in my Spanish class. My students would grab it for fun or wear it as prize, and as a new teacher I didn’t address it well.

Most of my students knew very little of authentic Mexican culture and that cheap straw hat didn’t help.

I had artifacts in my room from Peru, carefully packed from my travels, and I talked about their meaning to my students. I could have taken the time to get to know the sombrero, too.

Sombreros vary according to who is wearing them and for what occasion.

“Farmers and peasants wear sombreros made from different types of straw, while the more elite sombreros are constructed of plush felt. Decorations are not unusual, with braiding, beads, gold and silver threads, sequins and feathers adding a festive look, themes which often match an entire outfit, head to toe.

Mexicans didn’t invent the sombrero. As far back as the 13th Century, there’s evidence of Mongolians wearing protection from the elements. It only makes sense that spending the total of one’s waking hours exposed to the sky would result in such a creation.

The cowboy, both south and north of the border, is the image to which we are accustomed to being associated with the sombrero. A very popular version with a slightly different design is the poblano, which is a sombrero modified from the flat topped Spanish version.“

So here’s my proposal, at the very least.

Let’s teach our students the significance of the sombrero, and never divorce it from the rich culture it represents.

Let’s say you are decorating your Spanish classroom to surround your students with beautiful artifacts from the Spanish-speaking world.

If you have an authentic sombrero brought back from your family rancho, or carefully bought from a local artisan seller, I think that makes a difference.

Have a dollar-store hat on hand that students play around with casually? Maybe time to rethink. Is your classroom only displaying sombreros, moustaches, and peppers? Definitely re-think.

One more thing, for those of here for a really deep dive. What should we know about cultural appropriation?

I hear my Mexican friend when she says she loves seeing people celebrating Mexican culture. I hear the Latinx teachers who say they feel U.S. culture can be overly sensitive.

I’ve seen plenty of Mexican young people say, “What’s the big deal? Let’s celebrate and put on all the sombreros!”

Truthfully, I don’t know how to respond fully. Who am I, as a white woman, to contradict that perspective?

So, from my non-Latinx perspective, I offer this: I want to see Mexican culture uplifted, too. My question is how can we do it better?

Understanding the difference between cultural appropriation and appreciation can feel frustrating. It may feel like an ever-changing goalpost.

I think the work is worth it, though. I think we are capable of introspection, of hard questions, or learning new things.

Here’s a helpful summary from the Bamboo Telegraph“

“Cultural appropriation, otherwise known as cultural misappropriation, is a term coined when individuals coming from more dominant cultures make use of cultural elements of minorities without considering or respecting the history and significance they hold.

Cultural appreciation, on the other hand, is when individuals of a different background take the time to understand the historical significance behind elements of another culture and look into the oppression or marginalization that was experienced by the people in relation to their culture.”

Cultural appropriation buys the sombrero and says: “This is mine now– I paid for it and I can do what I want with it. I like it, so what’s the harm?”

Cultural appreciation buys the sombrero and says, “This is yours and mine now too. It’s beautiful; it reminds me of my travels or friends. Tell me more, teach me more.”