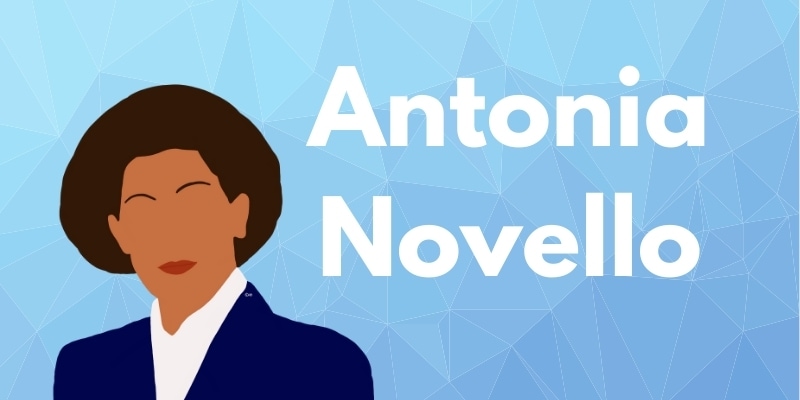 Inside: Learn about the life and career of Antonia Novello, along with her most famous quotes.

Antonia Novello is the first female and first Latin-American to serve as Surgeon General of the United States.  She worked to improve AIDS education, educated against smoking, and to help vulnerable women and children.

If you are here specifically looking for Antonia Novello quotes, click here to jump to that section!

Antonia Couello Novello was born August 23, 1944 in Puerto Rico. She was born with a condition called megacolon (an enlarged large intestine) that her family planned to get treated. However, her father died when she was eight years old and she ended up not receiving any treatment until the age of eighteen.

Though she was initially interested in direct care by being a pediatrician, she found the emotional toll too heavy. “When the pediatrician cries as much as the parents do, then you know it’s time to get out,” she once joked. Instead, Novello began serving in different public roles, feeling that such work could make a lasting difference.

Novello served as the deputy director of the National Institute of Child Health and Human Development for several years, before President George Bush nominated her to be Surgeon General in 1990.

As Surgeon General, Novello focused on children’s health and underserved communities, anti-smoking campaigns, and AIDS education and awareness. She was a popular Surgeon General and known for her empathy and advocacy.

Novello was later part of UNICEF for the United Nations and commissioner for the New York Dept. of Health, among other positions. She traveled extensively to Puerto Rico in the wake of Hurricane Maria. She was quoted as saying,

“Someone asked me: ‘What are you doing here? Which group called you?’ I said, ‘Are you out of your mind? I’m Puerto Rican, my island needs me, I have knowledge, and I’m putting it exactly where I think it can be used.'”

Novello graduated from high school at only 15 years old. She took it upon herself to obtain surgery at the age of 18. Due to complications, she had to have another surgery two years later at the Mayo Clinic.

These years of unnecessary pain she endured as a child helped her make the decision to pursue a medical career. She said of her experience, ” I thought, when I grow up, no other person is going to wait 18 years.”

This is a very quick but solid bio of Antonia Novello (1min 24s) to give an overview of her career:

An into to Antonia Novello through narration and interviews (1min 59s):

Another look at the life Antonia Novello, in Spanish (2min 4s):

“I survived many times in my life by learning to laugh at myself. That’s the best medicine. But I also became very self-assured and capable of saying that if I could do that, I can do anything.”

“How I vote is not relevant . . . I think that as a woman, as a Hispanic, as a member of a minority,” as the first surgeon general who is all these, “I bring a lot of sensitivity to the job.”

“I want to be able to look back someday and say, ‘I did make a difference.’ Whether is was to open the minds of people to think that a woman can do a good job, or whether it’s the fact that so many kids out there think that they could be like me.”