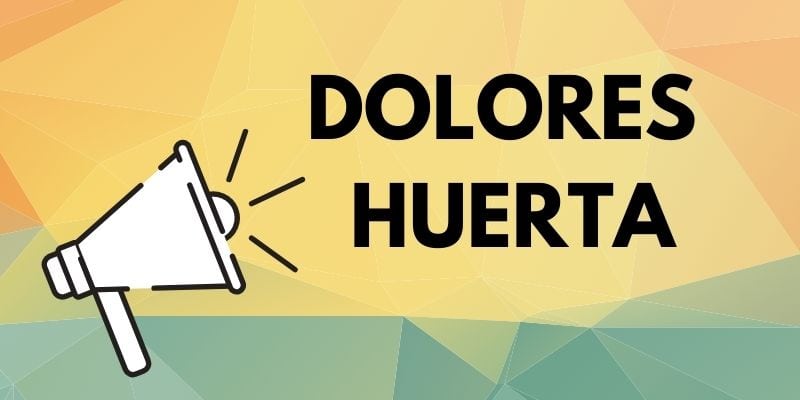 Inside: A collection of resources for creating a Dolores Huerta lesson plan or biography.

The name Dolores Huerta looms large in the space of women who have dedicated their lives to activism. This post will give you an overview of her life and achievements, plus many more resources for learning more about her remarkable life.

Here’s what’s included in the post. You can click on any link to jump straight to that section!

Huerta was born April 10, 1930. Her parents divorced when she was young, and Huerta was mainly raised by her grandfather and her mother in California.

She worked as a teacher for a time, during which she saw how many children did not have enough food. Moved by the poverty she saw, Huerta decided she could help her community more by organizing and working to improve conditions.

According to Huerta herself, “I quit because I can’t stand seeing kids come to class hungry and needing shoes. I thought I could do more by organizing farm workers than by trying to teach their hungry children.”

In 1955 she co-founded a local chapter of the Community Service Organization. In 1960, Huerta founded an association to help migrant workers receive documents and assistance.

Huerta was an integral part of the 1965 Delano Grape Strike, which lasted five years and involved over 5,0000 people. The workers, largely Filipino-Americans, were living in poor conditions while not even being paid minimum wage.

Eventually, the workers won out and Huerta negotiated the terms between the workers and the employers. Her sharp negotiating skills earned her the nickname “The Dragon Lady.” Over her lifetime, she would negotiate dozens of agreements like this one.

Dolores Huerta continued working and organizing. She organized a national lettuce boycott in the 70’s, which helped bring about the 1975 Agricultural Labor Relations Act, a landmark case for securing rights for workers.

She is famous for the phrase “Sí se puede” (“yes we can”), and has continued fighting for workers until now, through United Farm Workers. In 1988, she even suffered a severe police beating and successfully sued the city of San Francisco.

Huerta continued her work well into the 2000’s and received the Presidential Medal of Freedom in 2012 from President Obama. She was the first Latina inducted into the National Women’s Hall of Fame, and has received numerous awards and honorary doctorates.

Dolores Huerta was married twice and divorced twice, and has eleven total children.

Dolores Huerta knew what is was like to feel discrimination. When she was in high school, a teacher accused her of cheating on her papers because they were so well-written. The teacher thought that someone from a Latino background could not have written such a good paper.

This sort of experience, along with what she witnessed across her community, inspired her to fight for change and be sympathetic to others.

Both Washington and California have declared April 10 “Dolores Huerta Day.”

This short video from the Smithsonian is in English, with Spanish subtitles. (5m. 20s)

This is a 25-minute video on Huerta’s life, in Spanish.

This is the trailer for a PBS documentary on her life:

Here are some excellent Dolores Huerta quotes to share with your students.

1. “We must use our lives to make the world a better place to live, not just to acquire things. That is what we are put on the earth for.”

2. “The thing about nonviolence is that it spreads. When you get people to participate in nonviolent action – whether it’s a fast, a march, a boycott, or a picket line – people hear you, people see you, people are learning from that action.”

3. “We as women should shine light on our accomplishments and not feel egotistical when we do. It’s a way to let the world know that we as women can accomplish great things!”

4. “Giving kids clothes and food is one thing, but it’s much more important to teach them that other people besides themselves are important and that the best thing they can do with their lives is to use them in the service of other people.”

5. “Every single day we sit down to eat, breakfast, lunch, and dinner, and at our table we have food that was planted, picked, or harvested by a farm worker. Why is it that the people who do the most sacred work in our nation are the most oppressed, the most exploited?”

I hope these ideas and resources were helpful to you! If you have more ideas for Dolores Huerta lesson plans, let me know in the comments below!