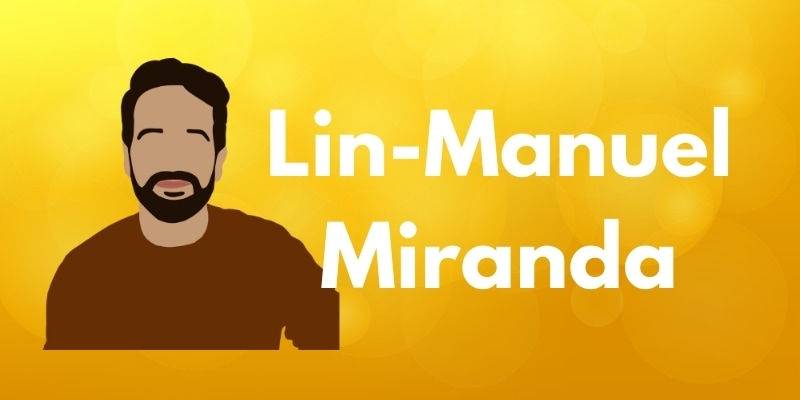 Inside: A list of Lin-Manuel Miranda quotes, along with lesson resources and a biography.

When talking about Lin-Manuel Miranda’s career, how do you sum it up concisely?

With someone this multi-talented, it’s probably easiest just to make a list when describing all he does and has done:

Of all his successes so far, Miranda is most well-known and beloved for In the Heights and Hamilton, two broadway musicals that experienced runaway success– especially the genre-bending Hamilton that won him a Pulitzer.

In this post, we’ll take a look at his life, career, and quotes, as well as a collection of resources for learning more with kids.

If you are here specifically looking for Lin-Manuel Miranda quotes, click here to jump to that section!

Lin-Manuel Miranda was born on January 16, 1980, in New York City, to parents of Puerto Rican descent. Miranda began acting and writing at a young age, in school productions. He attended Wesleyan College and graduated in 2002.

Manuel’s first show, In the Heights, premiered on Broadway in 2008 and Miranda himself starred in the leading role. It won four Tony Awards, including Best Musical and Best Musical Score.

Hamilton came to Broadway in 2015, and was an immediate hit. It won 11 Tonys, a Grammy, and a Pulitzer Prize. It blends both traditional Broadway sounds with hip-hop. This fusion comes naturally to Miranda, for whom– according to the New York Times— “He deeply loves musical theater and Broadway, and has since he was a child, and he deeply loves hip-hop and pop music as a whole, and has since he was a child.”

And from the Chicago Critic, “This ingenious work dares to take the Broadway musical into new, uncharted territory that combines history with contemporary language, current musical styles to make history come alive in a most engaging manner…. (it) grabs us and keeps us flowing with spectacular movements and dances with provocative rhymed vernacular and haunting, emotionally-charged music.“

Between the two musicals, Miranda has participated in many other projects. He has contributed to other Broadway shows, worked with Disney as a composer, singer, and actor, and even worked as an English teacher for a time.

Miranda continues to perform and write, and he currently lives in New York with his wife and two sons.

Biography of Miranda that is more extensive, though all the text is not narrated (8min 41s):

Song in Spanish from Encanto:

1. “Give your time, give your heart, give your service, give someone something you made.

2. “Destiny is calling you
Open up your eager eyes”

3. “I wish you clarity today. Clarity of thought, clarity of expression, a direct line between what you feel and what to do about it.”

4. “I think a lot about trying to meet the moment as honestly as possible, because I don’t pretend to have any answers. In fact, I have inﬁnitely more questions than answers.”

5. “Because of phones, we always have the ability to jump out of ourselves. But unless you learn how to be in your head, you’ll never learn how to create.”

8. “Every day has the potential to be the greatest day of your life.”

9- “Across centuries and continents, via twin strands of coincidence and providence, generations and generations
got it on
to create the inimitable recipe
that is you.
The gift of being alive, that’s all yours.
What do you wanna do with it?”